Pentecostal women are different than the women of this world. Women who are of Pentecost should act, behave and even dress differently. The same should be true of all Pentecostals, no matter if they are from the Assemblies of God, Church of God or the United Pentecostal Church. We all hold the same standards.

As a man that is Pentecostal and holds to what I believe in the apostolic faith; I place high value on Pentecostal women that still hold to the “old time” standards of dress in our churches. Sadly, far too many women try to look worldly to be accepted.

Personally, I like to see a woman that still has long hair that is uncut, long dresses, no makeup and very little jewelry. I could never take serious a woman that wants to look the same as the world does. If she does not want to come apart from worldliness in her dress, she still has a love for the things of this evil society. 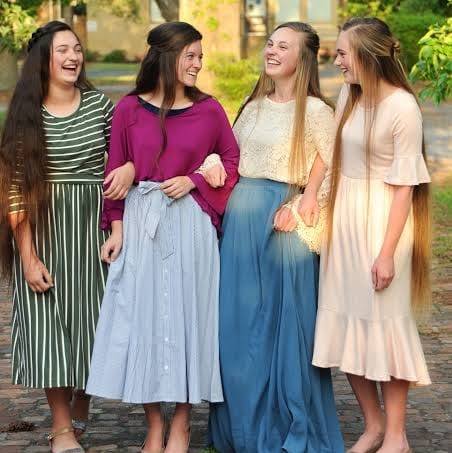 Pentecostal women and their hair

There is some debate about what is the “rules” about Pentecostal women and their hair length. Many in the Oneness groups hold it must be uncut from conversion; most in the classic Pentecostal movement hold that it should stay long but can be trimmed and more liberal Pentecostals do not care and let women go as short as they want. As such, there is no real standard.

The debate centers around 1 Corinthians 11:6,

What did the Apostle Paul mean in this passage at large and in this verse? The hard thing is theologians, Pentecostals and Non-Pentecostals disagree. Stanley Horton, one of the most well versed biblical scholars of history believed that it was an issue related to the culture of the apostolic age. He believed it was an encouragement, not a mandate for us today. Others would disagree with him.

While some read 1 Corinthians 11 to teach that you must have uncut hair, I do not see that in the passage. I believe that a woman that is a believer should want to have long hair as an offering to the Lord but cutting it is not a sin. We do know that a woman’s hair is her glory and a woman of the Spirit is often spotted by her long hair.

There are cases that a woman need to give up her hair for medical reasons. My mother has much shorter hair than she ever has had. The reason is she started to lose her hair and had some medical challenges. In those cases, I believe that there is nothing wrong with making that choice. While the hair might be an offering to the Lord, Pentecostal women are not in sin because they have medical issues! How should a Pentecostal woman dress?

Speaking of long things, there is also a debate among Pentecostals about how long a woman’s dress should be. The common issue is what is considered modest and what is not. I will be the first to say some women in our churches need a strong dose of modesty.

Some have translated this to mean that women who are Pentecostal can not wear jeans at all. Others have taken it to mean that they can wear jeans but not in the church house. Others think it is just for Sunday worship. There are even people who think jeans in the pulpit is not acceptable for women. It seems that most Pentecostals believe that jeans should not be worn in the church on Sundays but other days is fine.

Personally, I am more concerned about the length of the dress and how it fits than what day of the week it is. I firmly believe that women of the Spirit should wear longer dresses and cover their shoulders. Without stepping into legalism, I would like to see knees and shoulders covered. I struggle to believe the Holy Spirit does not convict Spirit filled women of wearing short skirts in the house of God!

Ultimately, the length of a dress is between the Pentecostal woman and the Holy Spirit but I think the longer the dress, the better as a preacher. What about Pentecostals and makeup?

Now, things are going to get even more interesting. There is not a common view on makeup among Pentecostals. There is even a lot of different ideas inside any given church family about this. The standard for long hair and dresses is much more established than makeup. In fact, even the more conservatives movements like the United Pentecostal Church have differences within their members on it.

I also want the women to dress modestly, with decency and propriety, adorning themselves, not with elaborate hairstyles or gold or pearls or expensive clothes, but with good deeds, appropriate for women who profess to worship God.

The question becomes what is adorning one’s self? How can one adorn themselves with decency and propriety? In some churches, the standard is makeup is fine. In others it is no makeup. I believe the answer is what is accepted in your church in your region. In other words, a woman can make herself beautiful within the biblical, cultural and pastoral standards.

In most cases, that would be little makeup and only keep it only to “enhance” what God has given you. Some pastoral standards could request there is no makeup on women in the church. I believe either is fine. However, there must be mercy for women who choose to wear it in decency even if the pastor hold to it being a “no go.”

Personally, I prefer no make up on a woman of God. God created you without makeup for a reason. However, that is my personal view and conviction only. I also hold that many find their identity it their image which is idolatry. This is another question that comes from 1 Timothy 2:9. What is proper for a Pentecostal woman to wear for jewelry? There is several ideas about this. Everything from none at all to anything is free game. What it does say is “gold or pearls or expensive clothes.” It is clear in the text that having gold everywhere and pearls on all around your neck is not something the Apostle Paul wanted women to do. The same is true today.

In the 21st century, I would translate this to be “excessive jewelry.” I do not see anything wrong with a woman have modest ear rings but when they have huge pieces of jewelry that distract people, I believe that is questionable in light of the spirit of 1 Timothy 2:9. Many women get out of hand with this. They have hundreds of dollars invested things they use to adorn themselves. At some point, it becomes sinful.

While I am not comfortable saying there that line is, I will say this: if you spend more on a necklace than you did on your bible; you might be in sin. How you spend your money is how your value your life. If you care more about being “cute,” than you do being holy; that’s idolatry.

The heart of this issue is how do you value God’s relationship. Many young women desire to attract men based on their physical appearance; not spiritual things. If you draw men by your appearance; you are setting yourself up for fornication. If you draw men by your passion for the Lord, you are setting yourself for marriage and prayer meeting. That’s the difference.

At the end of the day, I am not at ease telling people any standard on the subject because I believe the interpretation of the passage is very hard to make without stepping into legalism. I believe every Pentecostal women needs to make that call in view of the holiness of the Lord. It is not something that a guy on the internet should do to be honest.

It might seem sexist that men gets much more freedom in the dress before the Lord. Men are only told to not wear a hat in the house of God. I understand this could be seen this way. I hope people do not see this as the case. I am not a suit and tie type preacher for the record. Previous Story
Why I left YWAM (Youth With A Mission)?
→ Next Story
10 traits of false prophet : How to discern wolves among sheep